In this blog, Grandmaster Shifuji Shaurya Bhardwaj tries to wake up the youth to fall in unconditional love with the country and realize that there is nothing supreme above and over the Constitution of India.

Master Shifuji is a Freelance Commandos Mentor and founder of Mission Prahar. He is a staunch supporter of Indian Armed Forces, and is popular as a motivational Speaker, Action Designer, and pro at Kalaripayattu Gurakkal. A visionary and a vocal promoter of Indian Traditional Art Forms and Legendary Grandmaster of Military skills such as full contact Martial Arts, and CCQB expert. A highly proud Indian who is driven by the mission of compulsory military training to every verified citizen of India. He is known for his relentless efforts providing training through Mission Prahar, Mission Meri Mitti & Mission Prachand Bharat, Mission Shahadat Samman (Martyrs respect).

In lieu of the forthcoming elections the stride of Left and Right wing has been aroused and the target once again is the youth again. The youth sector being the most vulnerable and easy to trap is been targeted by the political parties, and under the name of religion, and biased values the division of people between the left and the right wing continues. Is this the reason why the freedom fighters shed their blood? It’s time that we go back to our history and open our eyes to see where we were and where we have reached! Nothing can humiliate their efforts and contributions more than we getting in the rut of the Left and the right wing! 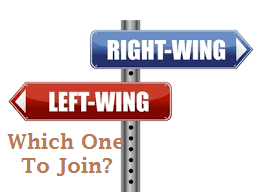 The history traces more than 7, 20,000 brave martyrs who fought for the nation’s freedom and remember this was not an act of self-gain. Their fight was against slavery, justice and right to freedom for the countrymen. The fight was united and without the formation of left wing or right wing. Parties such as Indian National Congress, BJP, Communist Party and others came after the fight for freedom began and many had already laid down their lives. This tells us that to fight for one’s right we do not need any Party. The only thing that all of us need to do today is respect the Constitution and follow the principles laid by it. The Right to Freedom and Speech is the fundamental principle laid in the Constitution and as citizens of the nation we have all the right to question. Well, but unfortunately, today this right is misused and questions are been raised for trivial matters which has no impact on the nation’s progress.

Today, all left and right wing parties blow their own trumpet and are using the same principle of ‘Divide and Rule’ which the British used to rule on us. We are moving back to the square one and under the influence of religious discrimination, we are heading for a sure-shot divided country once again. It’s important to understand that nation is the biggest religion and there should be no interest greater than nation’s well-being and progress. But it seems that the political environment today has a different agenda and unfortunately, the most powerful community of the nation which is the youth is succumbing to it.

Why do we not realize that country men working as farmers, army men, police force, traffic police men are all servicing the country without any religion discrimination or any personal interest? Soldiers toiling day and night don’t know if they are guarding the Hindus or the Muslims of the nation. Honestly, there is no problem called as Hindu or Muslim, albeit the real threat comes internally from the anti-nationalist, traitors and treacherous people masked with self-gain who raise these religion barricades. Today, rather than reaping the benefits of freedom that we got and helping the nation grow further, we are creating an environment of discrimination which shall be detrimental for the generations to come. Nothing more than this, can make the freedom fighters cry who fought relentlessly and gave their life and put their family at stake.

Why are we even talking about which political party should one follow? Just because one is a staunch follower of Hinduism than he is an apt BJP Party candidate, or someone comes from the Muslim community should be following their religious party? There cannot be utter shit than this! Where are we heading towards? Remember, there is nothing greater than the country and it’s Constitution. Everyone today, should be focusing only on how to make the nation stronger and make it grow to its fullest. Language, is not important, emotions are important. It won’t be right to consider that anyone articulate in English and is a remarkable communicator on TV channels, is noteworthy and supreme! With right to express, there is no established language for communication, so your emotions matter more than anything.

A clear message to the youth today is listen to your heart and hold the senses and patience to identify what is right for the nation. Nothing can be greater than you, your family, your parents or any of your social associations. The nation’s progress, safety and respect for its Constitution and soldiers should be the one and only common agenda of every Indian. Only this can help us unite and overcome all the internal threats that are jeopardizing the life of the youth today.

In the forthcoming elections, which Party to vote is something that everyone needs to give a thorough thought to? While buying vegetables we scrutinize it thoroughly, then why while selecting the nation’s representatives we can afford to get reckless. It is important to gauge the intention of the contestant, past records and performance, education and work done before giving your valuable vote. If you think that there is no one worth the position, remember we have a thing called as NOTA, which express your disappointment on the contestant abilities.

Do not get carried away by any political event or speech which sows the seeds of discrimination and brags about its own promises. Think thoroughly, and act carefully, because the nation does not need speakers, it needs someone who can act only for the nation’s benefit and well-being!

Wake up and rise to say Jai Hind, Vande Mataram, and Satyamev Jayate! This is what ignited the fire in the brave soldiers yesterday, today and will remain doing in the future. There are no bigger slogans and values than the ones laid down by these!

Sabse Pehale Watan Fir Pariwaar aur Aant Main, Main Khud. The nation comes first, now and will always be the priority for me over my family and me myself.